Federal Pacific and / or Stab-lok breakers can fail at an alarming rate. At a modest overload, 2-pole circuit breakers that had never been touched failed 25% of the time.

Most homeowners whose houses are served by Federal Pacific and/or Stab-lok (both manufactured by the same company) circuit breaker panels are unaware of the hazards.  So too are some inspectors and contractors.  Because most homeowners do not order periodic electrical safety inspections, the presence of these panels is often undiscovered until an inspection made in the course of renovating or selling a property.

Federal Pacific and/or Stab-lok breakers can fail at an alarming rate.  At a modest overload (135% of rating), 2-pole circuit breakers that had never been touched (never mechanically switched) failed 25% of the time, followed by a lockup that meant the circuit breaker would never trip in the future at any overload current.  Once these breakers had been flipped on and off mechanically, failures increased to 36%!

Worse, when individual poles on these circuit breakers were energized under the same conditions, 51% of the “virgin” breakers failed, and for breakers that had been mechanically operated, a whopping 65% of them failed!

When a circuit breaker will not trip in response to an overload there is a serious risk of fire. 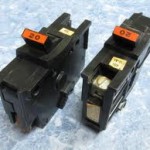 Federal Pacific Electric (“FPE”) panels and circuit breakers are a “safety-related defect”.  In some conditions, the equipment may not provide the safety protection against fire that was intended.

This defect is associated with FPE panels and circuit breakers manufactured in the 1970′s and possibly extending to current equipment being sold in the Canadian marketplace.  Testing was performed in 1982-83 by Wright Malta Corporation for the United States Consumer Product Safety Commission.